SPH – Introduction to a meshless method

The typical Finite Element Method has been used with success in the industry as well as research for many years. However, there are certain situations where the mesh-based approach is not optimal. For example, simulations where the model undertakes large deformations are hard to deal with a mesh-based approach as the mesh becomes severely distorted leading to high inaccuracies and most likely termination of the simulation. One strategy to overcome this problem is remeshing, which means that the mesh is to be recreated during the simulation. However this approach is costly, often difficult to implement in 3D, and prone to errors as the simulation progresses.

Overcoming of the typical FE discretization disadvantages naturally led to the idea of mesh free methods where the domain is no longer to discretized using elements, but instead a set of data points – “nodes” – are used. Meshless methods are useful for a diversity of applications, but usually come with an increase in computational time required to run the simulations.

Liu [1] addressed the needs for mesh free methods, which include the handling of large deformations problems, the avoiding of stability issues, the representation of continuous variable fields and fluid representation and its interaction with structures. Some of these methods are the Element Free Galerkin (EFG), Finite Point Method, Point interpolation method, Boundary node method, SPH, etcetera. Due to the particle-like representation, these methods are usually Lagrangian as the material moves along with the nodes.

This article puts its focus on the SPH (Smoothed Particle Hydrodynamics) as it is one of the most famous meshless methods. The SPH method was originally developed in 1977 and has ben greatly developed ever since, and hence becoming one of the most used nowadays for a variety of purposes, including:

The following gallery showcases some examples coupling SPH to shell elements in LS-DYNA (click on the gallery to see the animated results). The examples and input decks are available in the following link: http://www.dynaexamples.com/sph and belong to LSTC.

Impact of an idealized bird (SPH) against a turbine blade (lagrangian shells).

Impact of a ball against an aluminium sieve.

The Smoothed Particle Hydrodynamics (SPH) is a numerical scheme used for solving partial differential equations; originally developed for simulation of astrophysical problems [2; 3]. It was later modified and extended to solid and fluid dynamics problems [4]. It is a meshless Lagrangian method which makes use of interpolation to compute smooth field variables.

In the Finite Element Analysis the domain is discretized into elements whereas with SPH the domain is divided into particles, which are assigned mass, position and velocity, avoiding the classical problems associated with the mesh grid such as mesh distortion for large deflection problems. However, the use of this scheme also implies some disadvantages as zero energy modes, lack of consistency and tensor instability and the modelling of boundary conditions [5].

The aim of the following sections is to provide a basic understanding of the SPH methodology and cover the basic formulation and parameters required to run this numerical scheme.

First of all, a different formulation had to be derived for the SPH, rather than the one used for typical FEA.

In order to interpolate field variables, instead of a grid and shape functions, a kernel interpolation is used. The value of a function f(x), at an x location, is represented by an integral form of the product of the function and a weighting factor known as the kernel function W(x-x^’,h) [6].

The brackets 〈 〉 symbolize a kernel approximation, h is the so-called smoothing length parameter which defines the domain of the kernel by determining the area of influence of the smoothing function, x’ is the new independent variable and Ω is the domain of the problem.

A better understanding may be acknowledged by looking at the following figure where the kernel function is used to approximate a field variable of a particle i within a radius κh, where κ is a constant applied to the smoothing length. 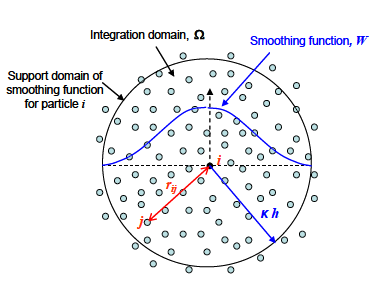 Domain and kernel function for a particle i [68].

The integral form of the gradient of the function can be calculated as the following expression:

Properties of the kernel function

The kernel function satisfies some inherent properties and requirements [5]:

Various options exist to define the kernel function; the most famous ones are the Gaussian and the polynomial splines.

Where the parameter r=(x-x^’)/h is a parameter which makes de domain of the function non-dimensional and d is the number of dimension of the problem (1D, 2D, 3D). This kernel and its derivatives are smooth and stable even for a distorted particle distribution [7].

Where C is a scaling factor which assures the compliance with the kernel function properties and depends on the dimension of the problem (e.g. d=1 for 1D):

This spline is used for its narrower support. The B-spline is zero for ranges beyond the kernel domain whereas the Gaussian kernel tends to zero but it is not exactly equal to zero, increasing with the radius of support. However, due to the piecewise definition of the B-spline is less smooth and stable [7]. 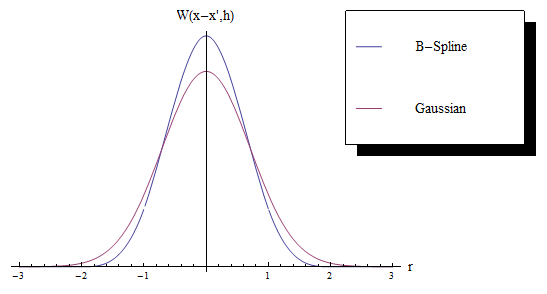 The integral form of the interpolation can be discretized as the summation of N discrete points:

The value of the filed function for a particle i is the addition of the contribution of its neighbouring particles j within the interpolation range κh, commonly 2h. The term m_j/ρ_j is the volume associated to each particle j. It is important to notice that contrary to the shape functions in FE the value of the function at a node/particle i is not its nodal value, it is the contribution of a sum of particles within its neighbouring domain.

The gradient of the function may be written as:

and r_ij is the distance between i-j particles.

Once the basic formulation has been covered it can be applied to obtain the conservation equations which govern the particle motion and its thermodynamic state.

A detailed calculation of the derivation process was carried out by Prof. Vignjevic [5] through the use of the kernel previously properties and other mathematical theorems. The final discretized conservation equations are shown below.

Where σ_j^αβ are the components α and β of the stress at a particle j. It is also worth to mention that acceleration vectors, such as gravity, may be summed to the total momentum. Artificial viscosity is also commonly used to improve the numerical stability of the scheme.

A thermodynamic relation between the state variables is needed in addition to the previous set of conservation equations. The EoS can be regarded as a constitutive equation linking the state variables such as temperature, pressure, volume or internal energy in a homogeneous material. It is used to describe the behaviour of fluids, solids and gases. Common relationships between pressure and two other state variables are defined in thermodynamics as:

Where the state variables and parameters are defined as: 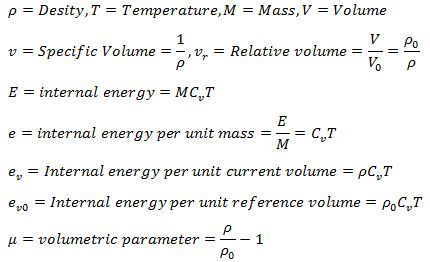 Some useful EoS introduced in LS-DYNA [8] and other FE packages are:

Where, the new parameters are defined as follows. C is the speed of sound in the material, S_1,S_2 and S_3 are coefficients of the slope u_s – u_p, γ_0 is a Gruneisen parameter and a is the first order volume correction to γ_0.

In its original form, it comes from relating a linear behaviour of the bulk modulus of a solid compressed to a finite strain with respect to the pressure:

Where K_0 is the bulk modulus and K_0′ is its first derivative with respect to the pressure.

Where e_V is the natural logarithm of the relative volume, C (Pa) is a constant and γ is the adiabatic index. Introducing up to 10 points, the pressure can be then tabulated and extrapolated if needed.

Where d is the dimension of the problem and div(v) is the divergence of the flow. Additionally, the smoothing length can be limited to vary within specific ranges depending on the initial smoothing length calculated at the beginning of the simulation [9]:

Where HMIN and HMAX are constants applied to the initial smoothing length (h_0) and CLSH is a constant. All these constants can typically be modified.

The neighbour search is one of the main tasks for every SPH time step. It may be a very CPU consuming task depending on the algorithm type selected [5]. Basically two options can be chosen in LS-DYNA: 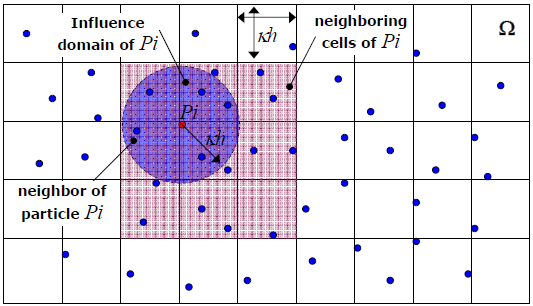 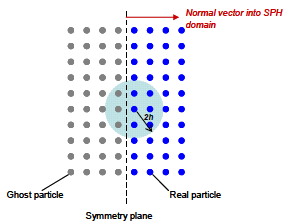 Contact handling in SPH has been ignored and dealt over the years through the conservation equations implied by the SPH formulation. However, this leads to some penetration when SPH particles from different components interact [10]. A literature survey about this topic reveals some unique SPH contact handling algorithm such as [10] and [11]. The particle to particle contact is commonly used instead of the particle to surface contact due to the difficulties defining a 3D surface out of SPH particles.

The most common approach to model contact is the penalty-based method, when a penetration occurs, node-to-node or node-to-surface, a force proportional to the penetration depth is applied to resist and eliminate penetration.

Example: LS-DYNA solves the SPH-FE coupling with a nodes-to-surface penalty based contact, where each SPH slave node is checked for penetration against the master FE surface.

There are many forms of SPH time stepping schemes, all of them explicit schemes such as leap-frog, predictor-corrector method and the low order Runge-Kutta. They have been employed efficiently throughout the years [6].

Where C_CFL is a constant and h_i, c_i, v_i are the smoothing length, the adiabatic speed of sound and velocity for a particle i.

Note that when SPH and FE elements coexist for fluid-structure interaction problems, the time-step can be governed by the SPH rather than the FE. This is for example the case when rigid elements are used to describe the structure. 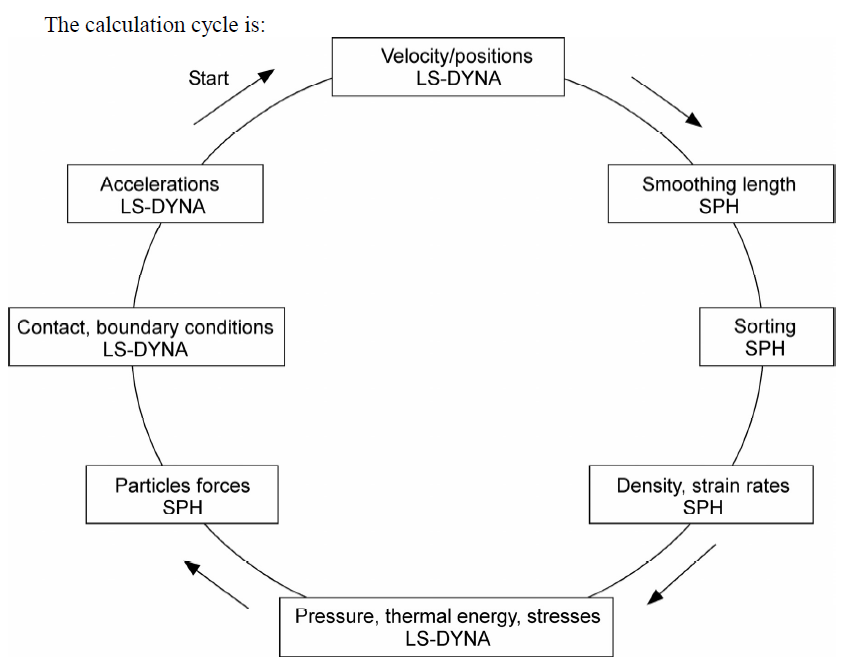 SPH calculation cycle for each time step in LS-DYNA software [8].

The SPH method have its inherent limitations. A list and brief description of each one is covered below. Prof.Vignjevic [5] described them as follows:

The SPH continuous formulation shows to be inconsistent in its domain, 2h, due to the incompleteness of its kernel support. While in its discrete form, if the particles have an irregular distribution, it loses its 0th order consistency.

Different SPH distribution types as illustrated in the LS-DYNA manual [8].

The grid must be as regular as possible and without large variations in order to avoid 0th order inconsistency, Mesh 1 above would be preferable to a non-uniform Mesh 2. 1st order consistency may be achieved by a kernel normalisation (CNSPH) leading to a different kernel and conservation equations approximation previously mentioned.

Where W^” (x-x’,h) is the second kernel derivative and σ is the stress (σ>0 means tension and σ<0 means compression). This instability arises due to numerical issues from the interaction of the kernel interpolation and constitutive equations changing the nature of the partial differential equations. This results in a clustering of SPH particles which often manifests itself as a tensile mode but it is not restricted to it [5]. 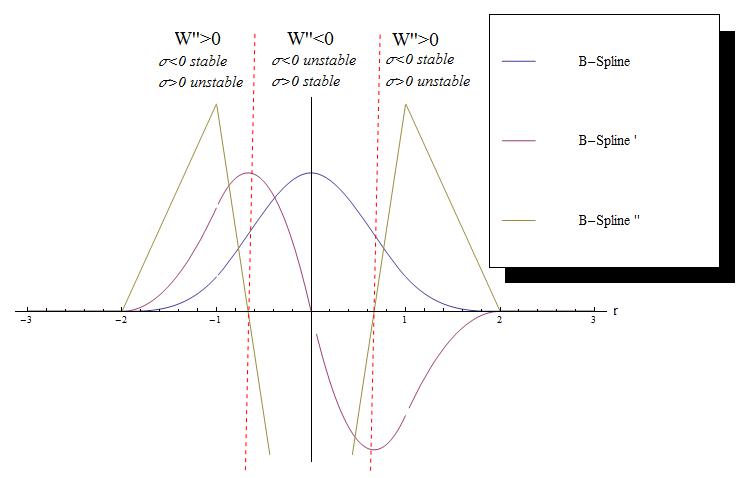 Spurious modes, known as zero energy modes, are often found in the FEM and it is not a self-unique feature. They are also present in particle methods such as SPH. There are certain situations when non-physical nodal displacement patterns produce zero strain energy. The main cause being that the field variables and their derivatives are calculated at the particle locations, which for certain field combinations may lead to zero field gradients when interpolated, making these modes easily excitable. Some solutions and further explanation and literature are covered by Prof. Vignjevic [5].